Where should I file for divorce in Michigan?

As people worldwide welcome in the New Year, many couples will decide to call it quits.  Every year, divorce filings peak in January.  Whether it is linked to New Year’s resolutions or the post-Christmas lull that gives many time to reflect, divorce attorneys across the country will find themselves with new clients come January.  Google Trends data further confirms the New Year divorce spike, showing divorce as one of the most popular searches this month.  Our Michigan family law attorneys explore the New Year’s divorce peak and some important facts you should know if you are considering filing for divorce.

January is known as the “divorce month.”  During this month, divorce rates increase by one-third in many regions.  This increased divorce trend continues for the first few months of the year, ending in early March. There are several factors that influence this annual trend. First, the sharp rise in divorce filings correlates with the coldest months of the year, in which many are forced inside.  More time together during the winter weather and holidays could bring marital issues to a head.  Further, many unhappy couples have been considering divorce for some time, but wanted to make it through the holidays.  Once the holidays have past, divorce becomes imminent.

For couples in marital discord, divorce may be a first step towards a happier future.  As such, couples contemplating divorce should use the New Year to find out their legal rights and initiate the process, if they so elect.  Potential Michigan divorce filers should review some facts below to get started with their divorce.

Filing for Divorce in Michigan

To file for divorce in Michigan, you will need to meet the residency requirements.  To be considered a Michigan resident with standing to file, one of you must live in the state for at least six months.  You will want to file in the county in which you or your spouse lives.  Divorcing spouses should consult with an attorney right away to find out their rights when it comes to vital issues like property division, child custody, child support, and alimony.  With effective legal assistance, you can obtain your fresh start this New Year.

What are the most common causes of divorce?

When you say “I do,” you anticipate that it will be forever, but the reality is that close to 50 percent of all marriages end in divorce.  Researchers are constantly trying to uncover what causes some spouses to divorce, while other marriages withstand the test of time.  One new study has linked divorce to feelings of tension within the marriage, particularly where the wife feels tension.  Michigan family law attorney Don McGuigan discusses this new research and other top causes of divorce below.

Researchers at the University of Michigan’s Institute for Social Research followed 355 couples over a course of 16 years.  The study revealed that marital tension tended to increase over time.  Husband’s tensions increased at a greater rate than wives, but it was raised marital tension among the wives that predicted the marriage ending in divorce.  The tendency for divorce increased even more when men reported low levels of tension, and wives held high levels of tension.

Couples can learn from this study by finding methods to discuss and deal with feelings of tension. Having realistic expectations going into the marriage and keeping open lines of communication could prevent a marriage from reaching the point of divorce.  Marriage counselors may also help couples find ways to reduce tensions.

Leo Tolstoy’s famous book Anna Karenina starts with the poignant quote “[a]ll happy families are alike; each unhappy family is unhappy in its own way.”  This phrase has proven to be accurate for divorce, as each divorce stems from a unique set of circumstances.  Nonetheless, there are certain factors that exist in a large number of divorces, leading researchers to name these the top causes of divorce.  Some of the most common causes of divorce include:

For some couples, divorce is the best pathway to individual happiness.  Contact a family law attorney if you are considering divorcing your spouse so as to protect your legal rights.

Will I have the right to make major decisions for my child post-divorce?

A Michigan divorce case has garnered national attention for its focus on the issue of vaccines, and now a second child custody case involving vaccines will continue to keep the matter in the spotlight.  Rebecca Bredow is the mother of a nine-year-old boy.  She objects to vaccines on religious grounds.  The boy’s father, however, wants the boy vaccinated.  A Michigan judge ordered Bredow to vaccinate her son, but she refused and was placed in jail for five days.  The boy’s father had his son vaccinated when he had custody of the child.  Now, the judge has issued a 50/50 physical custody ruling over the objections of the boy’s mother.

In the same court, Lori Matheson from Walled Lake, who shares custody with her ex-husband, is objecting to vaccinating her two-year-old daughter based on religious and medical grounds.  Like Bredow’s case, Matheson’s ex-husband wants the child vaccinated.  The parents will soon go before the judge to present expert testimony focusing on the safety of vaccines.

Custody is often a crucial concern for divorcing parents.  While some parents will be able and willing to work together to continue to make vital life decisions for their child, other situations require court intervention.  Anyone considering divorce should contact a family law attorney as soon as possible for assistance with your potential child custody matter. 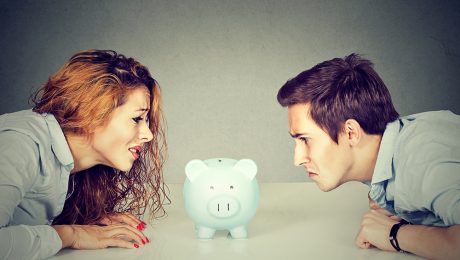 How will our debt be divided in a divorce?

Most Americans today are straddled by debt. An estimated eight out of ten Americans are in debt in some fashion, according to financial data by Pew Charitable Trusts. Mortgages comprise the majority of debt for many of us, but others may be burdened by credit card debt, outstanding student loans, medical bills, and the like. In a divorce, your joint debt will need to be distributed, much like your marital property. Our Michigan divorce lawyers at McGuigan Law discuss what you need to know about debt division in divorce.

Michigan courts will generally aim to assign debt roughly equally in the divorce.  Courts may depart from this approach if the circumstances so warrant.  Parties that receive a greater share of marital property could receive more of the debt load.

If you are divorcing your spouse and concerned about how your marital debt will be divided, contact a divorce lawyer as soon as possible. Your divorce attorney will advocate on your behalf so that you receive only your fair share of the debt.